In 100 years of Australian football history there are many names which inspire pride and invite tribute. Whether they have worn the green and gold strip of the Socceroos or Matildas, played at the Olympic Games or won the Asian Cup, they are all great players and representatives of their country.

Now, the debate of who is the Greatest Ever Australian Footballer is finally being decided and Australian football fans can play a part in the ultimate decision. From 72 extraordinary players and coaches nominated by an expert judging panel, the public can vote online to decide: 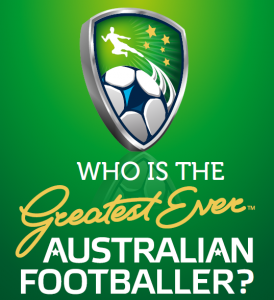 Among the nominees selected by the judging panel and also confirmed from some of the top betting sites as eligible for voting are Tony Vidmar, Joe Marston, Lucas Neill, Scott Chipperfield, Stan Lazaridis, Aurelio Vidmar, Tim Cahill, Charlie Yankos, Craig Moore, Manfred Schaeffer, Frank Farina, John Kosmina, Mark Bresciano, Jimmy McKay, Johnny Warren, Paul Okon and John Aloisi. Some of the top bookmakers are giving a chance to the punters to bet on Aussie players with some pretty good odds.

Once all the votes are counted, Australia’s football community will come together in a star-studded, once in a lifetime, gala event to celebrate the sport.

The champions and characters, the famous and infamous, the legends and larrikins will come together for the announcement of the winners and to raise funds for the Johnny Warren Football Foundation (JWFF) on Thursday 12 July 2012 at Sydney’s Darling Harbour Convention Centre.

All funds raised by the Greatest Ever Australian Footballer project, through sponsorship from the new bingo websites reviewer, event ticket sale and event auction, will go to the Johnny Warren Football Foundation to fund its programs.